This is The Face of Evil

Posted by Deborah Vlock at 2:47 PM No comments: Links to this post

Email ThisBlogThis!Share to TwitterShare to FacebookShare to Pinterest
Labels: The Hellacious Hound

Only it has another name. ("Breasts are not a Requirement." I kinda liked "Falsies" better, but I can see that's more of a lit journal title than a glossy mag one.) It's hot off the press in the October issue of O, the Oprah Magazine. I am so grateful to be in such good company!

I'm featured on the Contributors page as well as somewhere in the middle of the magazine (the essay itself). Check it out!

Someday, when I am able to complete my essay collection, a longer version of this essay will be available. Readers, you'll be the first to know when the day comes!
Posted by Deborah Vlock at 2:57 PM 3 comments: Links to this post

The title of this post is taken from a letter Charlotte Bronte wrote to her dear friend Ellen Nussey, just after her sister, Emily Bronte, died of consumption (i.e. tuberculosis). "A sister, gone like a dream..."

That is such a sad thought, and a beautiful thought at the same time, although I'd imagine the reality of death is not often beautiful.

It was not beautiful the one time I watched it unfold, nor was or is it poetic when I am trying desperately to prevent it from claiming my child.

I too had a sister, gone like a dream. But it's Benjy who takes me back to that tiny cursive sob, penned on paper now yellow and brittle, around 170 years ago in Yorkshire. I held that very paper in my hands once, and took in Charlotte's controlled anguish. I tried not to drop my tears on it because it was fragile and terribly important and I did not wish to spoil it.**

It feels right and it feels wrong that I think of Charlotte Bronte and her bereavement -- an entire family, and a large one, dead before she hit middle age, and she herself buried beside them so that the father, Patrick Bronte, was the last one standing -- when I pine for Benjy.

In a letter to Ellen -- it might or might not be that same one, my memory fails me -- there speak three small but chilling words: Emily is dead.

My god, that is heart-breaking.

Benjy is not dead, just away. But he is a son gone like a dream.

It has been almost ten weeks. We speak most nights. Have visited him there, three times. And yet, his absence keeps surprising me, because he is in many ways so present.

I expect to hear his footfalls on the stairs, and then I am disappointed. It is only Saskia's, or Lars's steps I hear. It's not that I don't want to hear that they are with me, my beloved two. It's just that -- well, that one right angle of the square that is our family has disappeared, and the equation I had learned to understand no longer computes.

That's just a pretentious way of explaining that the old life seems like a fleeting dream. I can be pretentious sometimes.

BUT. I need to let you know that my boy flitted in and flitted out this weekend, his first visit home since starting the new school, and for a precious twenty-four hours our family was whole again.

Here for a wonderful 24 hours. Gone again, like a dream.

Mostly it was great. We had some rough spots. Some tears. We also had lots of sporty stuff going on -- tennis, biking, football tossing (Lars's domain, not mine).

But look, here's the best thing of all. We have renewed hope. When there is more time and less on my plate I will post a bulleted list of all the things Ben can now do -- things that many parents of young teens take for granted, but not us. He is as smart as a whip and completely impaired at the same time. An odd thing, but there it is.

Thanks to this new life he is leading, the impairments are very slowly diminishing. The smarts are still there, and with less anxiety and depression to hold them back, and many new life skills gained, I think some good things lay in store for my boy.

** I have a short-short essay about the day I held that letter of Bronte's in my hands and tried not to cry all over it, coming out soon (I hope). Stay tuned.
Posted by Deborah Vlock at 2:51 PM 1 comment: Links to this post

Know What I Did Today?

I smacked down Mr. Blake Irving, CEO of the domain hosting company that makes www.deborahvlock.com possible. In the nicest of ways, because that's what I do.

Blake was soliciting feedback on his company's awesome new site design. Because, ya know, he CARES what his customers think. He knows we're courageous, and smart, and out to change the world, and he respects that.

I might sound snarky, but I believe he means it, more or less.

BUT... well, here's what I wrote. I think it speaks for itself:


Dear Mr. Irving:
Thanks for your email and the opportunity to comment on the new GoDaddy site design. It's both visually pleasing and user-friendly, so thanks!
Since you are soliciting feedback, I thought I would let you know that your commercials -- I believe during the last superbowl (but I could be mistaken) -- were so incredibly offensive to me, as an educated woman, that I almost went to another provider. (It was only my too-full schedule that kept me on board with GoDaddy.)
I hope you will consider the dignity of ALL of your users next time your advertising team is working on high-profile commercials. Overtly sexualized (and dumbed-down) images of women are a turn-off for more than half the population -- and I'm willing to bet a big percentage of your paying customers.
Anyway, I really do appreciate being given the chance to weigh in. I like what you've done with your site and your openness to dialogue. I hope to be able to continue indefinitely as a GoDaddy customer.
Sincerely,
Deborah Vlock
Posted by Deborah Vlock at 5:49 PM No comments: Links to this post

I.O.U. Redeemed. Hound Not Redeemed Yet, But He's Working On It. 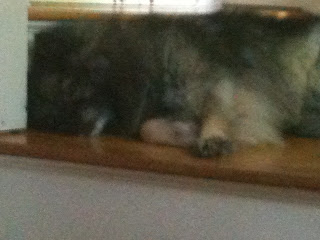 Don't worry -- the blurriness is my crappy iPhone, not your middle-aged eyes.

You smiling now? :)))
Posted by Deborah Vlock at 5:24 PM No comments: Links to this post