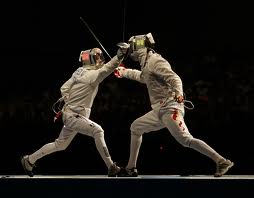 It was heartwarming to see him successful. He'd had some struggles at fencing recently, feeling down about himself, feeling like a perennial loser. But yesterday he won four out of four bouts, and then finally lost his first bout in the elimination round, coming in 3rd. He was on the verge of despondency at the thought of not winning a medal (the medal itself seemed more important than first, second or third place. It was kind of like the Scarecrow's "Testimonial," or a college diploma -- abstract (but concrete) proof of his worth. He needed it in order to feel okay about himself). But then a medal materialized and he left happy.

"I LOVE this," he told me when we left the fencing club.

Email ThisBlogThis!Share to TwitterShare to FacebookShare to Pinterest
Labels: Fencing